(Eventually. Sorry. I gotta get some sleep!) 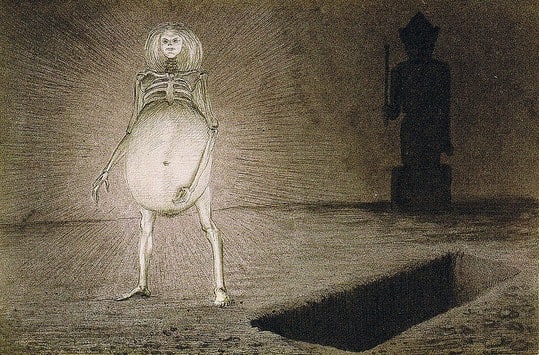 Heh, well here it is the 13th, and I should’ve had something prepared… We’ll go with a Machen, though I’m not really a big fan. The mystic Arthur Llewellyn Jones, aka Arthur Machen, is most famous for his weird novel The Great God Pan, which Stephen King has declared the best horror story in the English language. I wouldn’t go that far, but here’s a creepy little number, courtesy once again of Project Gutenberg Australia:

…another Symbolist, is our guest ghost artist tonight. Kubin, who was influenced by last night’s artist, was also an author of weird fiction; Die andere Seite (The Other Side) was written in 1909, I must look it up, it’s been compared to Kafka. An Austrian, he was also an early Expressionist and his work was declared “degenerate art” by the Nazis, but he continued to work until his death in 1959.