Dessert or side dish or main course or evil snack or whatever.
What’s your fav?

(Stolen from another topic)

Hey all you fuckers

Make these! You won’t regret, unless you are trying to avoid carbs:

(Credit for these ultimate best-you-will-ever-taste-brownes goes to the classic cookbook, The Joy of Cooking.)

(Get weaponry and fencing, you will need to defend the kitchen from children and would-be children until they cool.
Expect them to be finished and gone seconds after serving.)

Do be careful melting the chocolate.
Do take the “cool down the mixture” step seriously.
Do lower oven temp 25deg if using a glass pan.

Don’t ice these. The browns are way better than any icing could be.

Notes: from The Joy of Cooking.
Brownies bake for about 20 to 30 minutes more after being taken out of the oven, so don’t skip the step about leaving them covered with a towel. If you bake them according to the recipe, they will not be done at the end of the baking time. That’s okay - just make sure they sit under a towel.

I don’t like nuts in brownies, so I always skip them. The double-boiler to melt the chocolate isn’t really necessary as long as you’re careful not to burn the chocolate. Keep the heat low and use a whisk to be sure.

Cockaigne is a mythical medieval land of plenty, where all the harshness of medieval peasant life does not exist.

Melt the butter and chocolate in a double-broiler (or a pot over another pot of boiling water). Let this mixture cool, or the brownies will be heavy and dry. Beat the eggs and salt until light in color and foamy in texture. Add the sugar and vanilla gradually and continue beating until well creamed.

With a few swift strokes, combine the cooled chocolate mixture and the eggs and sugar. Do this by hand instead of using a hand mixer. Before it’s well mixed, fold in the flour. Add the nuts if desired. Stir gently until mixed. Try not to beat the mixture too heavily. Bake in a greased 9 X 13 inch pan for about 25 minutes at 350 F. Cover the pan with a towel and leave it to sit between 30 and 45 minutes. Don’t cut until the brownies are cool as the interiors are still moist when fresh from the oven.

(PS. I personally like them with lots and lots of walnuts added to the batter) 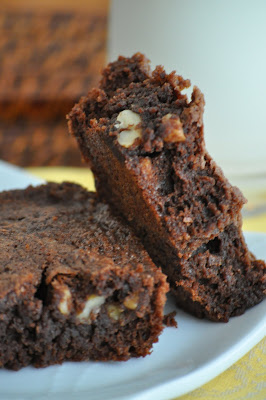