Yes, You Can Sing Happy Birthday To You

Hi, folks, back with the latest installment in copyright and public domain nonsense. This time, the perennial whipping boy of copyright: “Happy Birthday To You.” You probably heard that you can’t sing it without paying a royalty. That was true for many years. But you might not know how many twists and turns its history took until the day occurred when its copyright celebrated no more annual returns. Previous entries in this series included “Bambi: The Life of a Copyright in Disney’s Forest” and “The Game Is a Footnote!” about Sherlock Holmes.

For several decades, the simple, popular song “Happy Birthday To You” was locked beyond what felt like a bizarre prohibition. For what were said to be “copyright reasons,” any venue, recording, or broadcast needed a license for performance through 2016. Few restaurants, TV programs, and others wanted to pay. But they either came up with a terrible alternative song or ponied up.

“Happy Birthday” is a song that, despite its literal and prosaic nature, seems as much a part of the fabric of American life as “Swing Low, Sweet Chariot,” almost certainly a slave song that was standardized in the late 1800s, or “Streets of Laredo,” which came to us from Ireland.

And like some folk songs, it appears to have almost come into being spontaneously—the words, at least. That’s because the melody we know for “Happy Birthday” dates to the late 1880s and publication in 1893. The lyrics for that song? The tedious “Good Morning To You”:

It apparently came into many people’s heads to substitute something with a similar meter for good morning, happy birthday, even though happy requires a musical triplet to fit its syllables neatly into the same rhythm. Almost as soon as “Good Morning” appeared, “Happy Birthday” followed.

But how did this introduction of new lyrics allow for copyright that lasted 123 years, and which might have lasted 15 years longer? A tangle of assertions never challenged and missing paperwork.

Childhood Is Not a Disease

This song was the first in a series written and composed by two sisters: Patty and Mildred Hill. Patty Hill was among the first teachers trained in America to conceive of the early stages of childhood as requiring a particular education, something we think of now as an absolute.

Her work and that of her contemporaries helped spread the notion started in Germany by Friedrich Froebel in the early 19th century, that childhood wasn’t a period to ignore children or put them to work (still common in the late 1800s), but provide them opportunities of tailored exploration to help their brains and bodies develop. She spent several decades—first as a pioneer, then as a leading light—in early childhood development. If you have children or work around them, the unit blocks they play with arose as a refinement by a protégé of ideas she originated.

Patty Hill’s sister, an ethnomusicologist, provided the music to “Good Morning” and other songs published in Song Stories for the Kindergarten in 1893; another sister, Mary, apparently helped. The 1893 edition isn’t online, but the 1896 version is; it contains minor revisions. 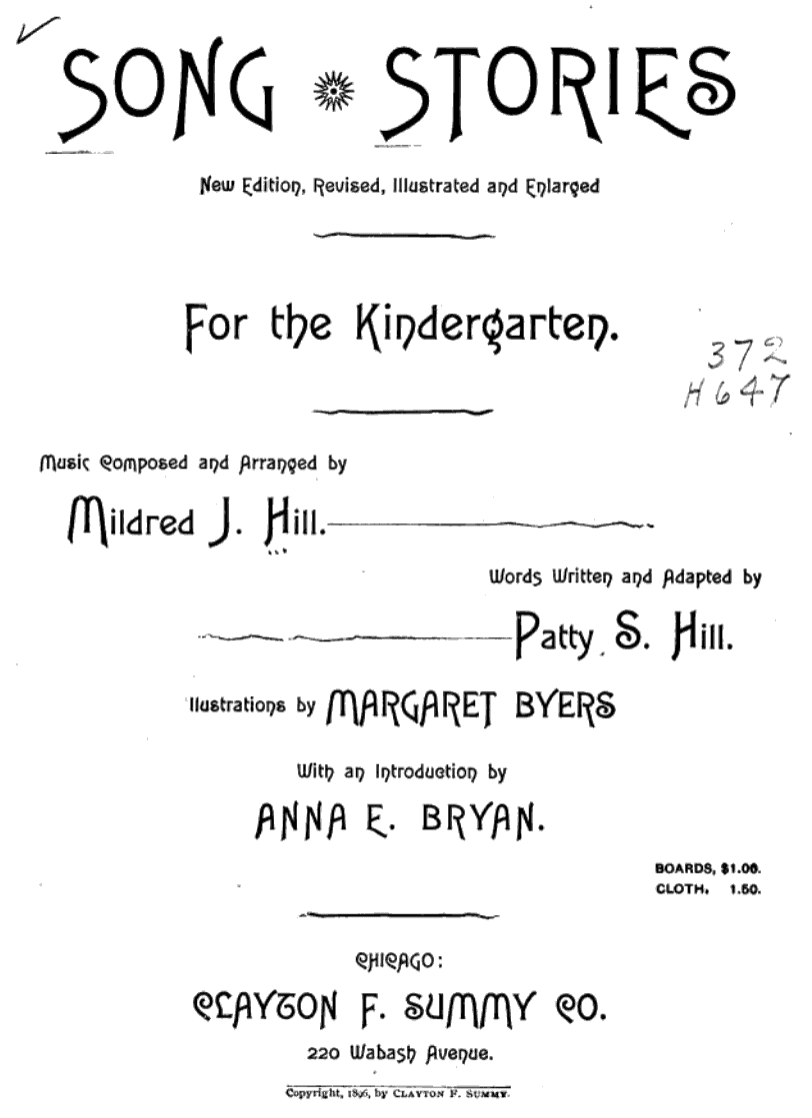 For those who have followed public domain stories previously, you might be crying out: how could an 1893 published work remain under copyright through 2016! The answer? It did until it didn’t. The musical composition and “Good Morning To You” lyrics clearly expired 28 years after publication, by the end of 1921 or 1924 (for a revised version), based on the duration of copyright at the time. (Copyrights could be renewed at that time for another 28 years, taking it to 1949 or 1952, but no litigant or defendant has ever uncovered a renewal in the U.S. Copyright Office’s records.)

However, the Hill sisters and their publishing partner, the Summy Company, argued in a 1934 lawsuit about “Happy Birthday” appearing in a 1933 movie that the “Happy Birthday” lyrics had been written—yet remained unpublished and unregistered, so still protected by copyright law. Unpublished manuscripts retain significant protection. (In fact, a letter of John Adams remains under copyright conceivably through 2052.)

Mildred had passed away in 1916, leaving her rights to her sister Jessica; Patty lived until 1946. In 1934 and 1935, Jessica Hill sold her inherited musical rights to Summy, even though the music might have been out of copyright by then based on the renewal issue.

Summy then issued new arrangements, which provide a fresh opportunity for copyright that covers just those arrangements, and registrations for the “Happy Birthday” lyrics, ostensibly moving them from unpublished to published status.

Yet despite Patty’s claim that the “Happy Birthday” lyrics were written down, she nor anyone else was ever able to produce that evidence across lawsuits in the 1930s, 1940s, and the mid-2010s. (The 1940s suit was between the Hills and Summy over royalties.) Meanwhile, “Happy Birthday To You” was published in many forms between 1900 and 1935. Sometimes the song included the music. Sometimes it was published with a copyright notice crediting the publisher, Clayton F. Summy Company; other times, there was no notice at all. 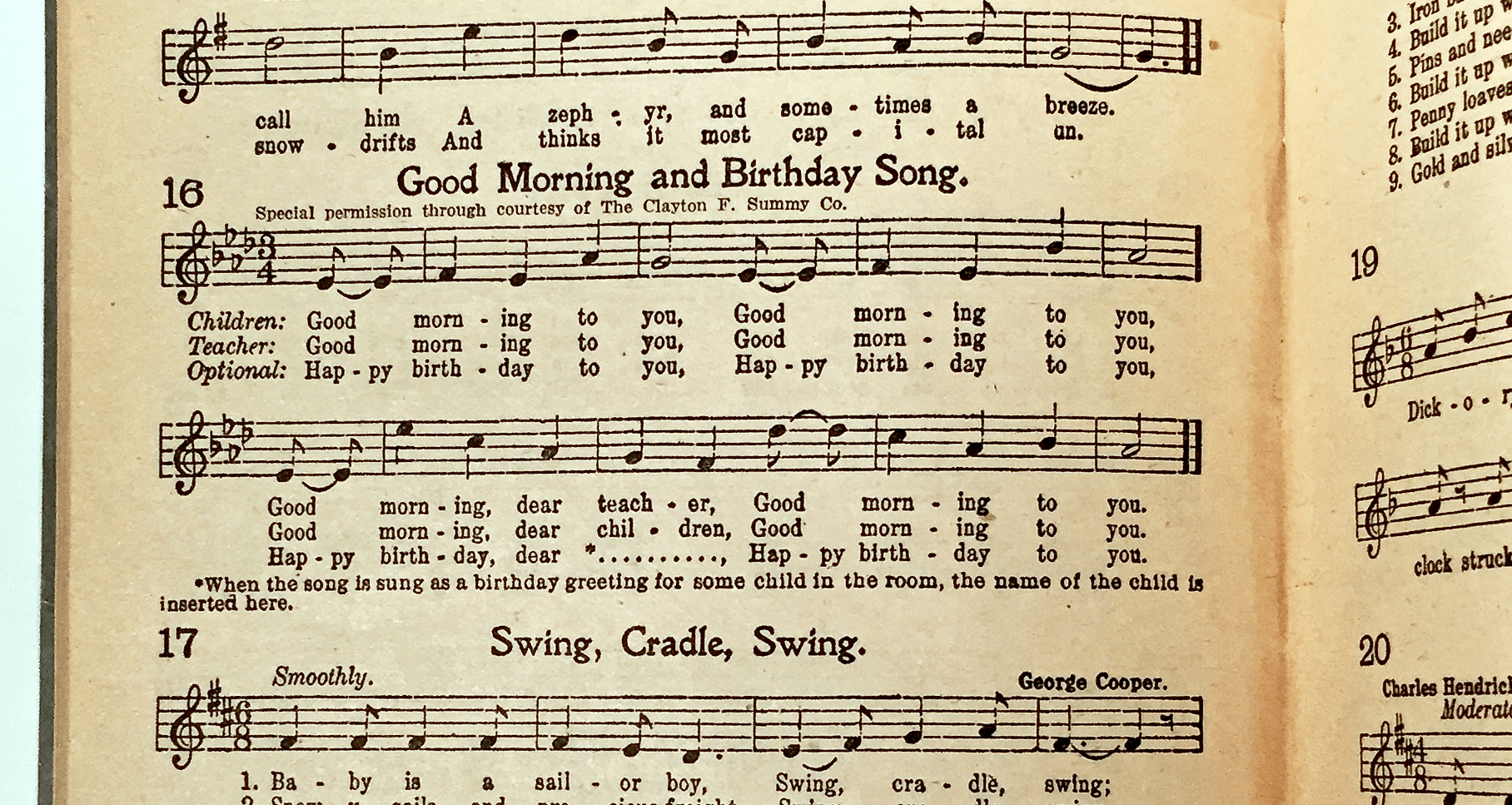 The 1935 lawsuit was settled without any real dispute over the current copyright status, allowing the copyright to reset to that year. With proper renewal 28 years after that and then later extensions, “Happy Birthday To You” lyrics and the 1935 arrangements would remain protected until 2031! That didn’t happen, though it took until 2016 to get a clear statement from a court.

A Documentary Filmmaker Had Had Enough

The Summy Company became the Summy-Birchard Company (1957) and then a division of the Birch Tree Group Limited (1970). That company was bought in 1988 by Warner/Chappell Music, where the “Happy Birthday” copyright and associated royalties were a shining gem among its holdings. The company brought in about $2 million a year in the decades preceding the 2010s from this one song’s licensing.

A documentary filmmaker, Jennifer Nelson, had enough in 2013. While working on a film about the song’s history, she refused to pay a licensing fee and filed suit to get a court to declare the song and its lyrics in the public domain. Her suit asserted that the copyright expired no later than the 1920s—but that “Happy Birthday” may have never had proper copyright protection in the first place.

At one point in the proceedings, her team introduced the book above that appeared to destroy Warner/Chappell’s defense by showing Summy had apparently licensed the “Happy Birthday” lyrics in 1922—and that they had appeared without a then-required copyright notice.

Filings in the case proceeded over years, and a judge released a preliminary decision in mid-2015. Then, in November that year, a surprise entrance into the battle! The Hill sisters had left their rights to a foundation that ultimately devolved them onto the Association for Childhood Education International. ACEI received about a third of the revenue from the song’s licensing, or $750,000 a year. ACEI claimed that if Summy and ultimately Warner/Chappell didn’t own the rights, ACEI did!

But given the potential for the evaporation of money and the relatively short time frame remaining on “Happy Birthday” in the best possible case, coupled with the judge’s earlier ruling, the parties agreed by December 2015 on a $14 million settlement. The parties finally signed off on the settlement in July 2016.

The settlement gave nearly $5 million to Nelson’s attorneys, with the remainder split among those who paid for licenses in recent years—likely starting three years before suit was filed.

But most importantly, all the parties agreed to stipulate the song was now in the public domain:

The Court hereby declares that, as of the Final Settlement Date, the Song entitled Happy Birthday to You! will be in the public domain.

Nelson released a 15-minute documentary to celebrate the decision and explain the history behind it. It would probably require an epic six-part, 15-hour mini-series to tell the whole tale, with at least an episode devoted to the remarkable Hill sisters.

But there you have it: as of July 2016, you can sing “Happy Birthday” with impunity in the United States. And if someone tries to stop you, politely say: “Tut, tut!” and show them the judge’s decision.

If you liked this, you’ll want to catch up on all of @glennf’s Meh essays