The Copyright That Finally Grew Up: Peter Pan

Hello, Meh folks! It’s time for another thrilling historical look at how copyright protections extend for absurd periods of time—and why. This time, it’s Peter Pan, the invention of an author who turned his character’s success on stage into a multi-generational philanthropic gift.

Peter Pan famously never grew up. The boy who frolicked and fought in Neverland and spirited away three children from London in J.M. Barrie’s loving and emotionally fraught tales remains eternally young. He’s always living in the present tense. So, too, did the copyright on the play remain eternal: it was first produced in 1904, but only published in 1928, keeping it protected in America for another two years. 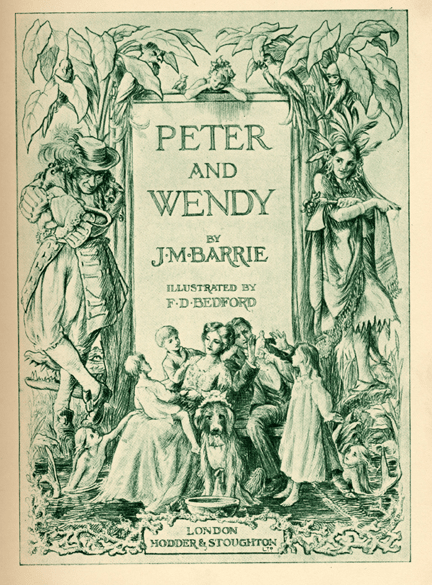 Through changes in American copyright law, and rules put in place in the United Kingdom, the theatrical Peter Pan has stayed firmly in the past far beyond his natural span. The seriousness of the legal system has paradoxically kept the carefree–nay, careless—child-king vibrantly protected.

The character of Peter Pan appeared first on stage in the 1904 production Peter Pan; or, the Boy Who Wouldn’t Grow Up; seven years later, in 1911, the novel Peter and Wendy was published. (Collectively, the character and work are often just called “Peter Pan.”)

Barrie ostensibly first created these stories as tales to tell the children of a close acquaintance, Sylvia Llewelyn Davies (née du Maurier). George, John (known as Jack), and Peter (then a baby). The older boys posed in 1901 for pictures acting out a pirate adventure that has the obvious seeds of the play. (Many literary historians believe the death of his older brother Jack at 14 was also a key inspiration; Barrie’s mother never stopped mourning Jack.)

You can see how this might have led Barrie to commit a great act of generosity: he donated the copyrights to all his Peter Pan works to the London children’s medical institution, the Great Ormond Street Hospital, in 1929. His one proviso? The hospital could never publicly reveal the value of this donation. Speculation is that royalties and theatrical licensing fees resulting in a few thousand pounds a year of revenue at its initial donation from, growing by decades later to millions a year. Peter Pan is staged thousands of times a year, and filmmakers have released nearly a dozen adaptations.

The facts of the play and novel’s copyright are fairly clear, but if you’ve read my previous articles in this series, you know that nothing ever runs true. No one has disputed the year in which the works appeared for the first time. Yet the path to the end of their copyright duration winds past swamps and plunges off cliffs.

The play version of Peter Pan may have debuted in 1904 but, for copyright purposes, only the first published form “counts”; thus, 1928. The United Kingdom’s copyright laws, then and now, followed the Berne Convention, an international agreement the United States only joined in March 1989. Under that convention, copyright expires some number of years after the death of the creator. That’s currently 70 years in the United States, UK, and most other countries. (Canada is a notable exception, keeping copyright limited to death plus 50 years.)

The United States’s pre-1989 rules meant that the play should have had its copyright expire in 1956 (28 years after 1928) or 1984 (after a 28-year renewal, then allowed). However, due to subsequent extensions, all works starting in 1923 were ultimately granted a 95-year period of protection. That leaves the play in copyright through December 31, 2023.

It should be easier to figure out the novel’s copyright status path from creation to the public domain, but, of course, it is not. Published in 1911, it is part of a group of works between September 16, 1906, and December 31, 1918, that became subject to a long series of extensions passed into law through nine distinct acts! As a result, the ultimate duration for stuff created during that range is 75 years. Peter and Wendy entered the public domain on January 1, 1987.

That leaves the United Kingdom! Surely it’s simpler? J.M. Barrie died in 1937. Thus all his works had their copyright expire at the end of 1987.

But, wait! Clap hard enough, children, and you’ll find that the UK brought his copyright back to life: a 1995 extension shifted expiration from 50 to 70 years following one’s passing, bringing the UK in line with the European Union’s copyright duration. This change briefly revived many works that had entered the public domain, lasting until their new termination. For Barrie’s, that was 2007. Goodbye, Tinkerbell!

But, wait! Clap really hard, and you’ll find that a 1988 law, the Copyright, Designs, and Patents Act 1988, extends in perpetuity in the UK the right for Great Ormond Street Hospital to receive royalties from productions or publications of the play form of Peter Pan, or adaptations that derive substantially from it!

But, wait! Stop clapping: your hands will get chapped, and this next part isn’t worth the applause. The hospital decided to attempt to apply the misguided logic that because the play’s script remained in copyright in the United States, it could control the rights to the character Peter Pan.

The author J.E. Somma sued Great Ormond Street for the right to publish her work, After the Rain, A New Adventure for Peter Pan, a sort of critique of the original in fictional form. The hospital and Somma settled privately, with the hospital praising the work publicly.

In subsequent years, Disney and others released Peter Pan-related adaptations and uses of the character with nary a peep.

You’ll find in my article about Sherlock Holmes, “The Game Is a Footnote!”, that a US appeals court judge precisely defined how the protection of character traits in copyrighted works: a copyright holder can control only aspects that remain in stories, novels, plays, and other work under protection.

In that formulation, anything in Barrie’s 1911 novel—whether it’s in the play or not—is fair game, while only unique characteristics in the play might be argued as requiring a license. Your Peter Pan fiction and performances are safe so long as you check the differences and constrain yourself for another 22 months in the United States, and avoid staging productions too close to the original play in the UK.

Peter Pan’s past may be ever-young, but his future will become unfettered by age or law.

If you liked this, you’ll want to catch up on all of @glennf’s Meh essays.