Building the plane on the way up

This is the latest installment in a regular series of researched and reported stories that @dave asked me to write about things of broad interest to the community. Previous articles have tracked down the history of SHOUTY CAPS and the earliest uses of “this page intentionally left blank.” 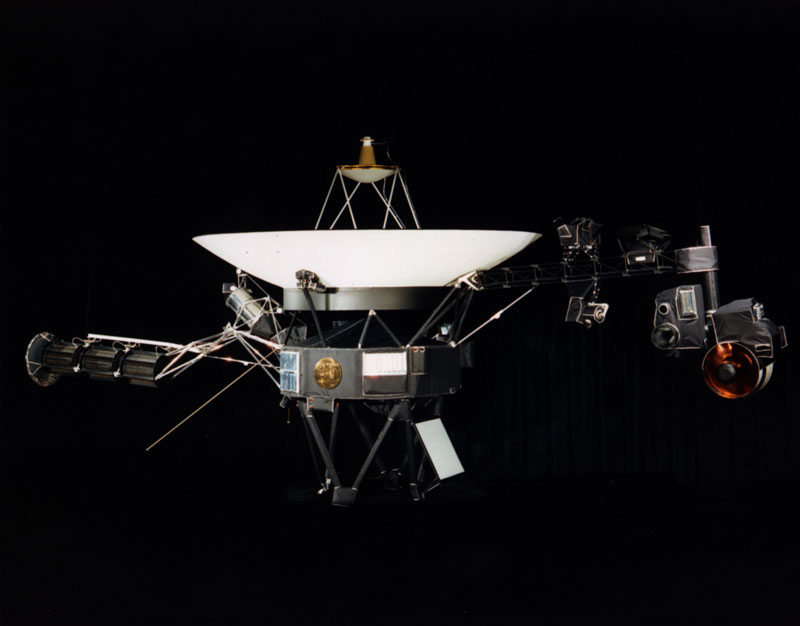 In 1977, NASA launched Voyager 1 and 2, probes intended to extract new information about the gas giants Jupiter and Saturn. After both probes successfully captured huge amounts of data, Voyager 2 went on to Neptune and Uranus, while Voyager 1 swung out towards interstellar space. An astonishing 39 years later, the two probes continue to function and return data that expands humanity’s knowledge about the universe.

The Voyagers contained a large array of instruments, radios, and computers, along with radioisotope thermoelectric generators (RTGs) that continue to provide ever ebbing power and heat. But one device has had more impact on the Voyagers’ initial and subsequent ability to send data back at vast distances than any other: that piece of hardware contained algorithms, silicon, and—hope.

You see, in 1977, Jet Propulsion Lab (JPL) scientists packed a Reed-Solomon encoder in each Voyager, hardware designed to add error-correcting bits to all data beamed back at a rate of efficiency 80 percent higher than an older method also included with Voyager.

Where did the hope come in? When the Voyager probes were launched with Reed-Solomon encoders on board, no Reed-Solomon decoders existed on Earth.

NASA had sent two previous missions to Jupiter in the Pioneer series, one of which went on to Saturn. But the vast distances meant extremely low data rates. Even with directional antennas aimed at Earth and signals picked up by the big dishes at the Deep Space Network (DSN), Pioneer 10 and 11 only had peak data rates as high as 1 and 2 Kbps, respectively. At Saturn, solar noise reduced Pioneer 11 to about 512 bps.

That bit rate includes the overhead for error correction, which allows the recovery of bits garbled in transmission, or at least the knowledge that what was received was in error. Prior to the Voyagers, the convolution codes used could mean that more than half the data sent was related to error correction.

The Voyagers were prepped to use a somewhat better error-correction method known as a binary Golay code. This had a 1:1 ratio of error correction to data, or 50 percent efficiency. Voyagers transmitters had greater throughput than the outer-planet Pioneers, allowing for 115 Kbps at Jupiter and 45 Kbps at Saturn. That allowed the overhead and reliability for the primary mission goals.

But for Uranus and Neptune, the raw data rate would be vastly slower: about 9 Kbps at Uranus and 3 Kbps at Neptune. That would make it difficult to send back many images or much data. The Voyagers have onboard magnetic digital data recorders, but even with some images stored, a lot of opportunity would be lost.

This is where the Reed-Solomon encoder kicks in with Voyager 2, which made the rounds of Uranus and Neptune. The encoder was about 80 percent more efficient than Golay code, needing roughly one bit of correction to every five bits of data. (A very technical explanation can be found in Reed-Solomon Codes and Their Applications on page 29.) 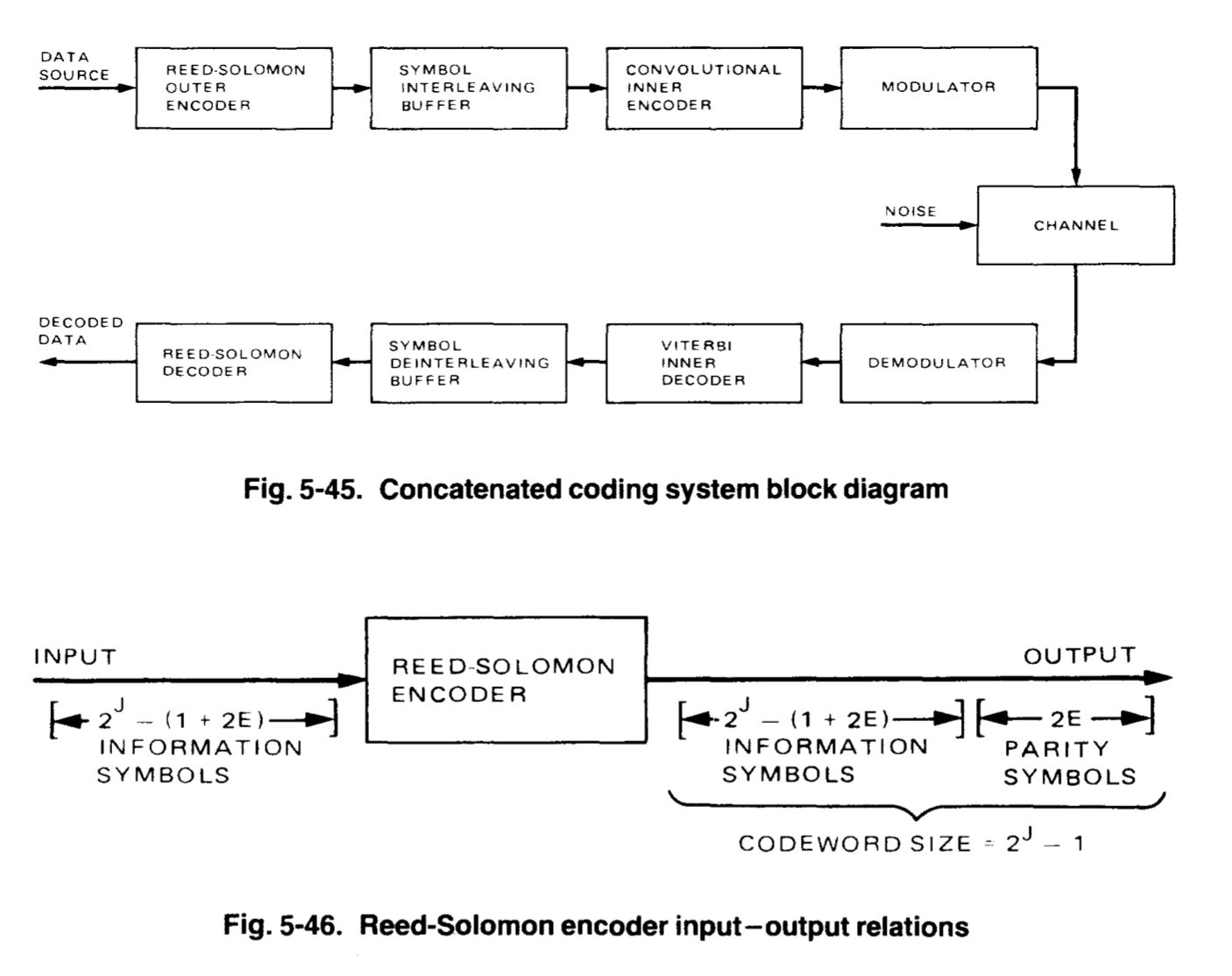 Ed Stone, the principal investigator on the Voyager missions from their inception and for decades to follow, told me in 2013 that the Reed-Solomon hardware was partly a backup. The Voyagers were slated to have X-band (8 to 12 gigahertz) “traveling wave tubes” for what was then high-speed data transmission. However, he said, there was some concern that the X-band transmitters wouldn’t be ready for the launch window, which was timed to a rare favorable alignment of the four gas giants.

The newer encoder would have been paired with a lower frequency S-band (2 to 4 GHz) transceiver, which would allow for less throughput. However, since the X-band radios were available and worked, JPL could delay creating a Reed-Solomon decoder until after the extended mission to Uranus and Jupiter was approved.

This delay gave the mission the advantage of technological improvements, and I can’t find any accounts of it being difficult by 1986, when Voyager 2 reached Uranus, to create and test the necessary earth-based hardware. Raymond Heacock, the spacecraft systems manager on the Voyager missions, expounds at greater length on this in an oral history of the project, Voyager Tales: The Personal Views of the Grand Tour.

The Reed-Solomon algorithm was paired with some other improvements. The mission had a data-compression algorithm that could remove the redundancy in the 1.9MB images (800 by 800 pixels at 8 bits per pixel per RGB channel). But there wasn’t capacity to run it in the primary computer that handled data processing. For the Uranus and Neptune follow-up, that computer’s redundant backup was tasked with compression, something seen as potentially risky during the primary mission phase. 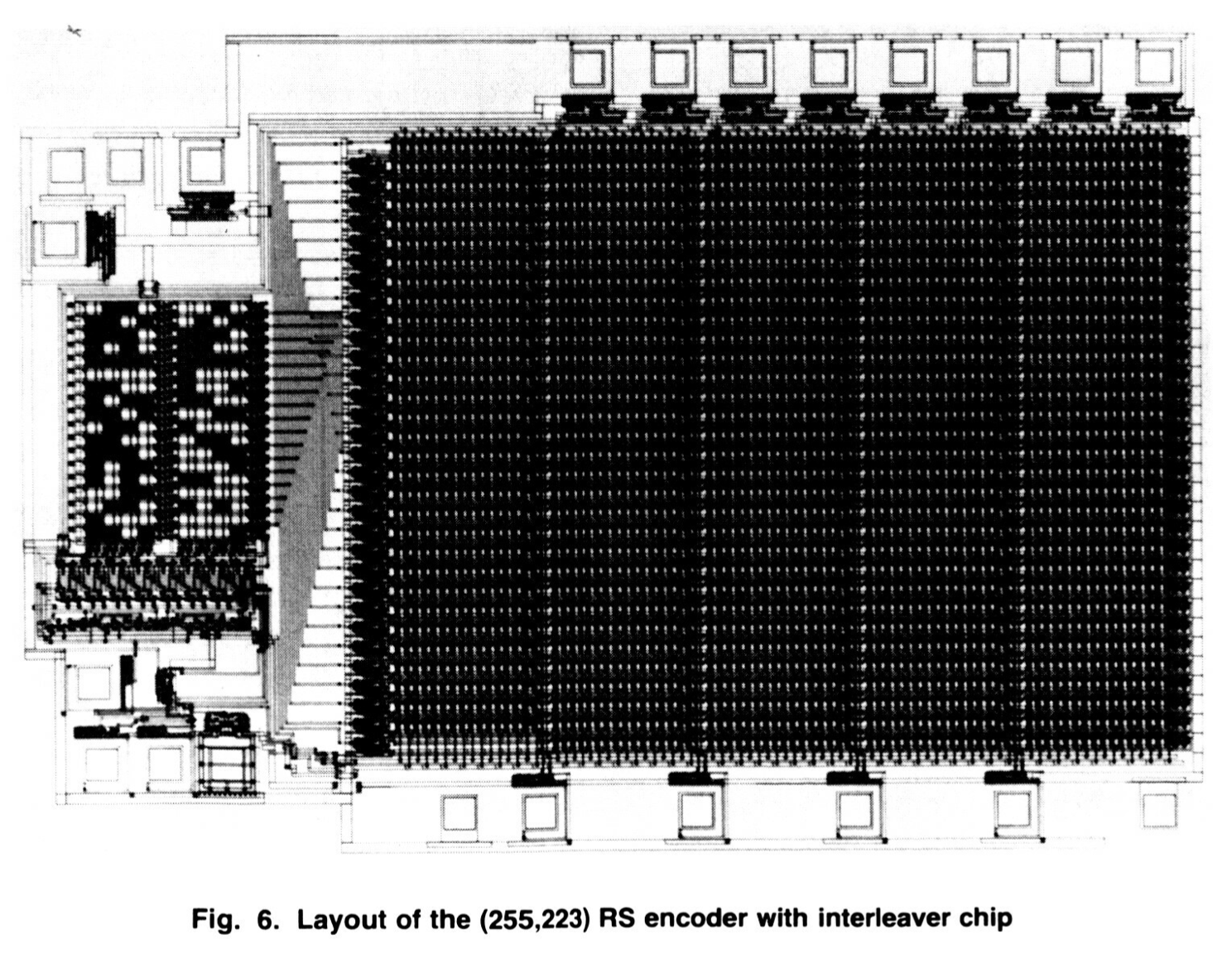 The compression reduced files by a factor of 2.5 as photos of space and planets have a lot of redundant and empty pixels that lend well to lossless compression. That let a 1.9MB image fit in 760K.

However, this compression algorithm was fussy: any loss of bits could render the images unrecoverable. But Reed-Solomon is robust enough to prevent those losses at the level that NASA required, making it a neat fit.

While the Voyagers were away, NASA also increased the size of some of its DSN dishes and added dish arrays, which acted as aggregated receivers, before Voyager 2 arrived at Uranus. The DSN was improved again before Neptune. All these improvements added up, allowing Voyager 2 to transmit nearly as much data from those outer gas giants as it did from the inner.

No mission since has flown by Uranus or Neptune, and thus the inclusion of the Reed-Solomon encoder had a dramatic effect on our knowledge of those planets in the interim. At the moment, the next likely flyby isn’t until the late 2020s or early 2030s, given the state of NASA mission planning. Missions beyond Jupiter likely require RTGs, which rely on a currently very limited supply of the plutonium 238 isotope that powers them. Production of Pu-238 has been restarted in the United States, but it will take years to meet requirements for missions in planning and stockpile enough for this kind of ambition in the future.

Voyager 1 and 2 continue to send back data, but at much, much lower rates. The cameras on each probe were shut off after their respective planetary missions, and data on current measurements trickles back at 160 bps on a regular basis and Voyager 1 continues 30-minute-long 1400 bps transmissions every six months to relay information stored on an 8-track digital tape. (A failure in an instrument on Voyager 2 in 2002 makes that transmission unnecessary.)

Even at that rate, the Voyagers keep producing new science. In 2013, Voyager 1 left the heliosphere, the magnetic bubble that extends from the sun about 18.5 billion kilometers (125 astronomical units or AU) in the direction that probe headed; it’s currently roughly 20.5 billion miles from the sun and Earth. After leaving the heliosphere, Voyager 1 remains in the solar system, if you define that as some do by the gravitational pull of the sun, which extends vastly farther. But it’s entered the interstellar medium, in which it interacts with the high-energy particles found between solar systems. Voyager 2 hasn’t popped out yet; it’s in the heliosheath, where the solar wind slows because of the pressure of interstellar gases.

The RTGs on both Voyagers decay at a continuous rate along with a dwindling fuel supply used for the thrusters. It’s remarkable they’ve lasted this long, but NASA hopes to keep at least one of the few remaining instruments running through 2025 and sending low-speed data that whole time.

The mission will have been one of the most successful and comprehensive ever conducted. Most that have followed, even those as ambitious in nature, are more constrained in scope, focusing on one planet or comet. The Voyager mission scientists were exceedingly clever in eking out more than they could have hoped for when the probes were launched. But the hope nestled in the heart of the spacecraft helped them reach farther.