Bambi: The Life History of a Man Ending His Life in Exile (Part 4)

In this exploration of the vagaries of copyright, I’ve looked at the classic novel and movie Bambi, written by Felix Salten in 1922 and 1923. In part 1, we learned about the book’s genesis and how it was made into the classic Disney film. In part 2, I took you through Disney’s interest in extending copyright, which ultimately cost them dearly. In part 3, an appeals court’s baffling decision extended the life of Bambi in a way that didn’t quite benefit Salten’s family. In this final part, you’ll learn about Salten’s political ideas and the last part of his life. 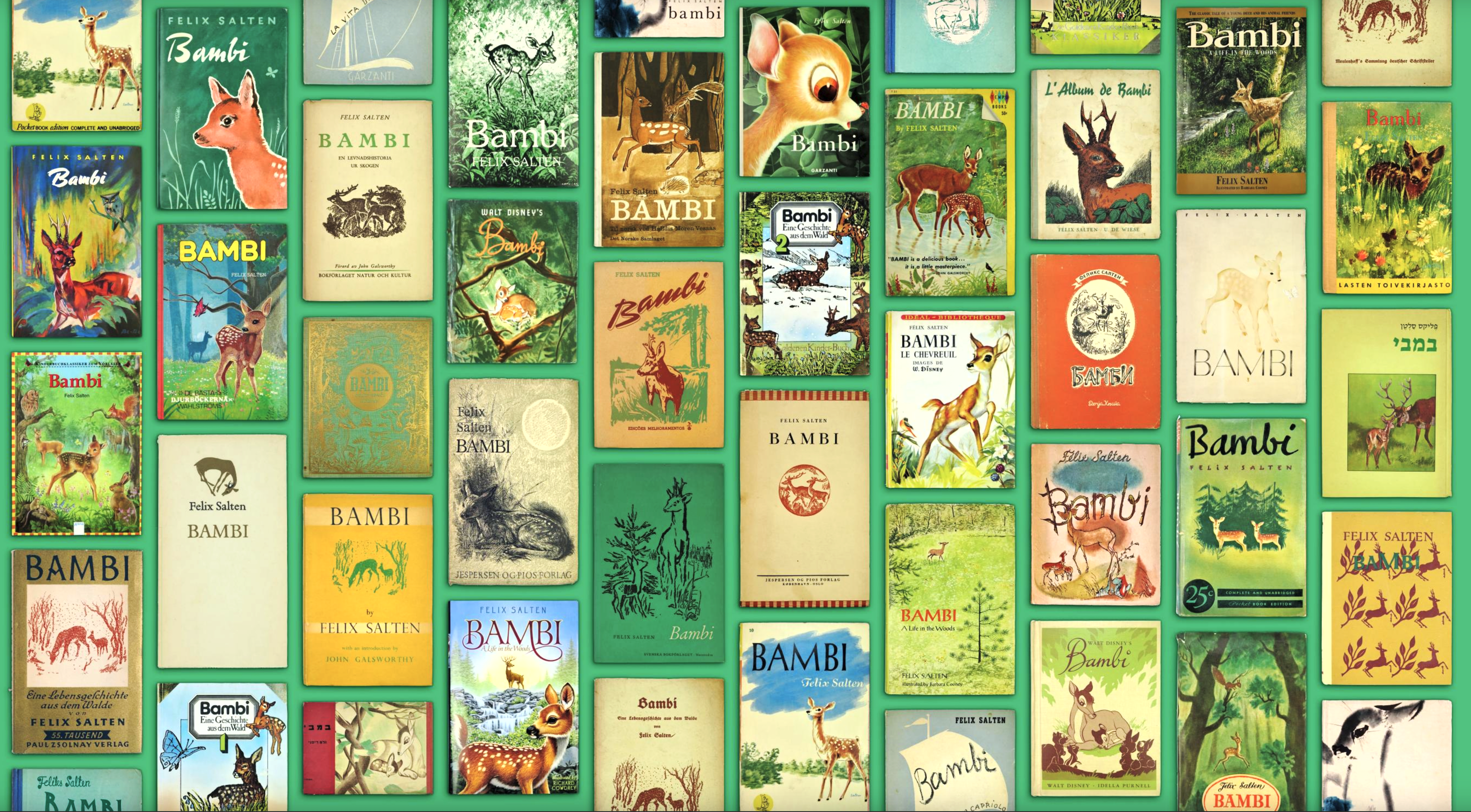 From the catalog for the museum exhibition “Felix Salten: In Schatten vom Bambi,” continuing at the Wien (Vienna) Museum through October 15, 2021. You can read a long preview online of the catalog in German.

Despite having survived the rise and fall of empires starting nearly at his birth, Felix Salten’s life and work after Bambi became highly constrained as the National Socialist Party overtook Germany in the early 1930s, even though he was living in Austria.

As a Jew, a journalist, a fiction writer, a newspaper editor, and a strong proponent of Zionist for a time (someone in favor of establishing a Jewish state in the Middle East), he presented a large target for fascists and anti-semites. Yet his views and actions aren’t what you’d expect from that biography.

Born as Siegmund Salzmann in the Pest part of Budapest in 1869—in what had just become Austria-Hungary two years earlier—he spent little time there. His parents moved to Vienna just weeks later. As part of the new empire in 1867, Vienna had granted Jews rights to full citizenship, and many moved there to upgrade their place in the world from provisional to permanent.

The end of World War I dissolved that empire in 1918, and the disruption and displacement across Europe resonated for decades. The Allied Powers of that war demanded reparations, a common practice at the time, but never on such a vast scale. Germany, seen as a wealthy, industrial aggressor, was heavily levied, despite the destruction wrought against the country, no matter the fault for it. The newly emerged sovereign land of Austria was seen as unable to pay and thus avoided most reparations for the portion of its role in the war.

Perhaps thousands of books have been written about that period between the wars, so there’s little more insight I can add. But Salten was 49 years old when the Great War ended, and it’s into this gap that his life seemingly flourished at first, with Austria suffering less than Germany, before becoming far worse.

Despite all the characteristics of Salten’s I noted above, some sources indicate he was a fervent Austrian nationalist, supported World War I until its aftermath, and didn’t initially oppose the rise of fascist control within Austria. Fascism in that country developed as something called “Austrofascism,” which staked itself out as a defender of Austria and its culture against German intrusion.

One could argue that his pen name, Felix Salten, was also an attempt to appear more Austrian than his birth name would indicate. At some point, it’s unclear when, he adopted that pseudonym as his legal name.

In 1933, Salten and several other Austrian caused a distinct stink at the meeting of International PEN (now known as PEN International) in Italy. PEN was founded in 1921 to promote cross-national cooperation and culture among writers and defend against threats against literature from censorship and other causes.

Salten was the president of the Austrian chapter, a role he described later as “honorary,” and the meeting occurred in May 1933. This was about two weeks after the German Student Union in Berlin, a Nazi-backed group, engaged in the first mass book-burning in Germany. At least 25,000 volumes went up in flames, largely those written by Jewish people, liberals, pacifists, and the like.

The Austrian delegation proposed a resolution to condemn the burning, leading perplexingly not just to the German representatives leaving the meeting, but also Salten, his publisher Paul Zsolnay, and other Austrians. The reason? They claimed they had no right to intervene in German internal affairs—a tricky issue at the time, despite what would seem to be moral clarity, because of the tension over Austria’s right to exist as an independent nation.

In June, the Austrian PEN chapter issued a stronger condemnation, “defending intellectual freedom and condemning the abolition of human rights and the persecution of writers in Nazi Germany,” and Salten and most other members resigned, according to Donald Daviau’s 1995 book, Major Figures of Austrian Literature: The Interwar Years 1918–1938.

Not that this helped. The Nazis banned Bambi in 1936 in Germany because, they said, it was a “political allegory on the treatment of Jews in Europe.” It was also widely burned. In March 1938, the Nazis annexed Austria to Germany, putting a temporary end to its separate existence.

In 1933, Salten had felt compelled after his actions at PEN to publish a personal condemnation of the German actions and defend his Jewishness, and, not long after, contributed to an anthology of German-language Jewish writers. But in 1938, he was ready to defend his actions at PEN. A new state committee in Austria asked him to answer questions about his role in the group, and he wrote that rather than speak against the German book-burning action, he had resigned his position and left the organization.

In 1939, his daughter, who had married a Swiss man in 1928 and obtained Swiss citizenship, managed to obtain a limited residency permit for her parents. The Saltens’ son, a film director, had died in 1937 in a traffic accident.

In every account, the Saltens’ department is described as “fleeing” Austria, but they did take with them thousands of books. He was not allowed to work as a journalist in Switzerland and instead produced a series of novels, including a sequel for Bambi and others with talking animals or animal allegories—two of which Disney licensed and made into movies. The second Bambi novel follows the titular character having become the Great Prince of the Forest. (Disney’s Bambi sequel, Bambi and the Great Prince of the Forest, released in 2006, derives narratively from the first book.)

Anna’s husband died later in 1939, and she remarried another Swiss man a couple of years later, the admirable Veit Wyler, who refused to deport Jewish refugees entering Switzerland, aiding them with paperwork and passage. He and his daughter Lea later helped found an international aid group, Rokpa.

In 1941, Germany revoked his citizenship, and the story in his family—although it comes from those that never met him—was that he feared deportation from Switzerland at that point through the end of the war. Ottilie Salten née Metzl passed away in 1942. He died shortly after the cessation of the war, in October 1945 at age 76.

He did get to see Bambi, or so it’s thought: it was shown in Zürich in 1945 and it appears from at least family lore that he saw it. Salten’s reaction wasn’t recorded. (Pamela Travers, the creator of Mary Poppins, who wept during the premiere of the movie of her creation, told Walt Disney afterward, “The first thing that has to go is the animation sequence.” Disney’s reply: “Pamela, the ship has sailed.”)

It’s possible Salten wouldn’t have liked the alterations to his work, particularly the introduction of so much sentimentality. Yet many of the core elements remain preserved about loss, grief, brutality, and sudden change, subjects he knew well from his later life.

Starting January 1, 2016, Bambi and all of Salten’s work entered the public domain in Europe and most of the world, as the life-plus-70-years’ doctrine was either in place or harmonized to 70 years while his work remained under copyright. That didn’t spark a spate of Bambi derivatives because the United States remained off-limits, and Disney is a keen litigator.

After January 1, 2022, however, we could see his original vision brought to life on screen again. Modern filmmakers have the chance to tackle a place everyone thinks they know, but few do. Maybe with the turmoil across Europe and nearly everywhere, Bambi has something fresh to offer a new generation.