We have a lot of cats. At one point, we had 38. All rescues, from the street or friends who couldn’t keep them for one reason or another.

We’ve gotten to the age where we aren’t taking anymore in. Stopped a few years ago. Our vet’s office finally got the message to quit calling us for kitties that needed homes.

So, last month we said goodbye to Rocky, a cat we took in because his current owner had a lease and the landlord said “the cat goes or you go”. The cat belonged to her parents and her parents had moved in with her when her father needed hospice care. We took him in with the understanding, should the situation change, she could have the cat back.

Unfortunately, we found out the year after he came to live with us that he had a fungal infection, cryptococcus, and that it was extremely hard to treat and would take at least six months. We were okay with that. Rocky was not. He refused to be medicated. Hundreds of dollars for different meds. Liquid, compounded chewables, he was having none of it. He was a big cat and he fought when it was medicine time. I still have the scars to prove it.

And he ended up hating us and being afraid of us. He ran into hiding whenever he saw us. Our cats have access to the backyard, the fence is modified to keep them in. Rarely, another cat has gotten in, but I can count the times on one hand that that’s happened.

So, we made the decision to just let him live out his life, knowing full well what the outcome would be. We had him for about two years before the fungus affected his brain. He had a hard time getting around and it was to the point that he didn’t recognize the other cats, wasn’t eating and we knew it was time. On February 20, we said goodbye to him.

We were down to twelve cats.

Imagine our surprise to see a not our cat in the yard the next morning. We’d seen him around on occasion, he’s a feral, not too many of them around, because we’re in heavy coyote area. And we looked at one another and said “he’s staying here; if he can’t get out of the yard, this is his new forever home”. We didn’t see too much of him, we weren’t even sure he was still in the yard. For a week or so we heard him calling at night, but there were never any cat fights. The resident cats didn’t seem to care one way or the other.

We put out dry food and it got eaten, so my husband started putting out wet food at night when he fed the resident cats. It was eaten as well. Was it Nooby? Or was it a possum? We couldn’t tell.

It was Nooby. I saw him along the back of the property a few times and once he became accustomed to feeding time, I could see him checking out the feeding spot around the time the food was put out. We have a camera on the roof and I moved it to watch the doghouse where the food is. And every night, on schedule, there’s Noobs.

One morning, my husband said “Nooby is out by the pool with Ron Howard”. And I looked and they were both just sitting there.

That was the first time we’ve seen him out. And I spoke to him through the open window and he didn’t run. I think he’s gonna be okay.

Needs vetting and fixing, his tomcat jowls are a sure sign that he’s not neutered. And he’s pretty skinny. But we’re the proud guardians of a new kitty who will not be hit by a car or a meal for a coyote.

And this makes me happy that he’s finally coming around to the fact that he’s safe here.

I grabbed this snapshot from the roof cam last night. That’s him on the deck of the doghouse on the bank. I went outside and spoke to Noobs and he looked at me, didn’t run. That’s a good thing. Of course, I wasn’t very close to him, but he didn’t look very concerned. 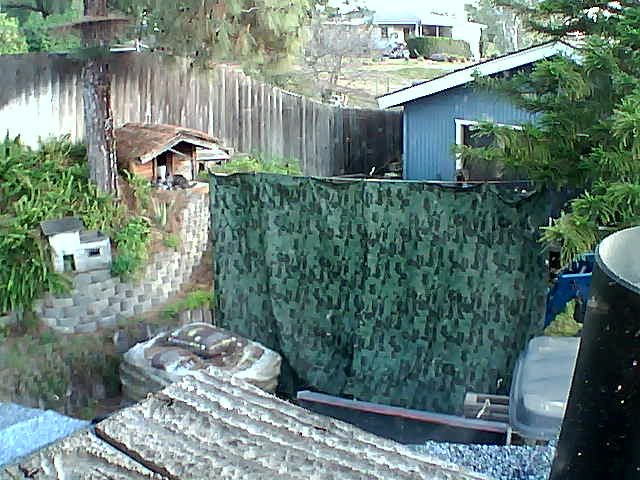