(Sixteen… Man, time flies whether you’re having fun or not.) 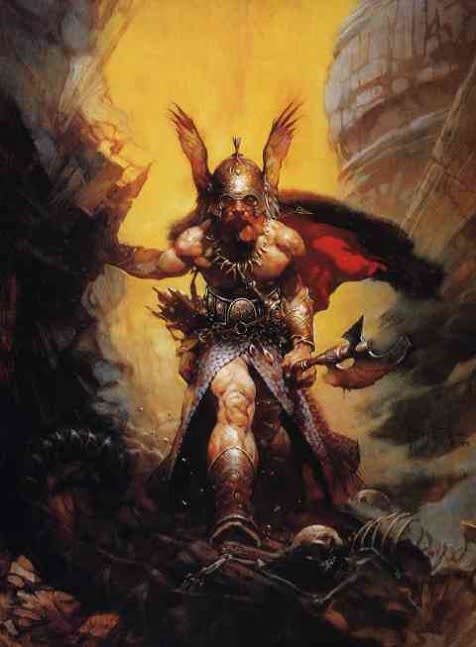 BEWARE! It seems strange to say beware to folks who KNOW they’re reading horror stories, but sometimes the language in some of these older stories may be NSFW? Assuming, of course, you read horror stories at work (SFW ones, 'natch). You know what, I’m not going with the story I was thinking of, The Dead Remember, a tale of supernatural revenge on a murderous racist - it might have been bold in its day, but now seems a little… politically correct? Besides, it’s set in Texas! As was its author, Robert Ervin Howard. A gifted fabulist, his appearance apparently belied his ability, with his onetime girlfriend declaring of their first meeting: “It was unbelievable. He was not dressed as I thought a writer should dress.” Supposedly he was a feminist? It’s hard to know how much of Wikipedia to believe. Like Clark Ashton Smith, his work spanned genres, and once again we’re going to dip into some fantasy with our horror, and spend a little time with Howard’s most famous creation, Conan the Cimmerian. So, thanks once again to Project Gutenberg Australia, here is :

THE TOWER OF THE ELEPHANT

Well, we can’t have REH without a Frazetta illustration (for research purposes only, of course). Man, it sucks that he’s dead. Here’s to your immortality, Frank, and if there is a separate heaven for artists, I hope it’s different from most of your pictures.