Mike Rowe had an interesting encounter with a drone recently and took to facebook to tell the tale. Thought you all would find it interesting.

Leave Me Adrone!
Early this morning, deep in the middle of some sort of strange gardening dream, I was awakened by the sound of a giant bumble bee, hovering a few inches from my ear. As I slowly entered a more conscious state, I realized the sound was not coming from a bee in a dream, nor for that matter, a bee in reality. It was coming from something much larger, just outside my bedroom window. Dressed in my favorite pair of non-existent pajamas, I leapt from my bed and pulled the drapes aside. There, not three feet in front of me, was a camera, dangling from the underside of a drone. The red light was on, and the camera was rolling.
I was slow to react, partly because I was still waking up, and partly because my first instinct when confronted with a camera is to say something pithy. I can’t help it. I’ve been saying pithy things to cameras for the last thirty years, and old habits die hard. Well this morning, I had no words for the outrage I felt at such an intrusion. I was incensed, and as Freddy egged me on with a chorus of snarls and barks, I moved onto my second instinct - an irresistible urge to blow the contraption out of the sky.
Seconds later I’d pulled the Mossburg 12-guage from under my bed and grabbed the cellphone from the bedside table. In no time, I was out on the deck downstairs, about fifteen feet below the electronic Peeping Tom. The drone had moved even closer to my window. I could see the camera panning left to right, and I could hear my dog unleashing a level of indignation usually reserved for raccoons and feral cats. Somewhere, in the logical part of my brain, it occurred to me that nothing good can come from an angry B-list celebrity standing on his deck with no clothes and a loaded shotgun, but I was not really in touch at that moment with the logical part of my brain. I was focused only on the joy that would follow the roar of the Mossburg, and the satisfying sprinkle of cheap plastic that would rain down upon my deck in the aftermath.
I pumped a shell into the chamber, enjoying the “crunch-crunch” sound that makes shotguns worth owning. I had a clear shot - nothing but blue sky above - and more than enough umbrage to justify the destruction I was about to unleash. But then, as I was literally squeezing the trigger, I saw the camera tilt down. It was pointed directly at me, and in that moment - I froze.
I’d like to tell you I stopped because I realized that discharging my weapon in such a fashion would be frowned on by the local constabulary. But really, what stopped me was the realization that somewhere nearby, a drone operator was staring at his monitor, pondering the image of a very naked guy with a very familiar face, pointing a shotgun into the lens of his Go Pro and looking every bit as crazy as Gary Busey and Nick Nolte at the nadir of their careers. I froze, because I could see the video that might very well appear on the local news, (with considerable blurring, naturally.) The same video that might soon appear on my mother’s computer screen, along with the headline - “Dirty Jobs Guy Totally Loses It - Gets Naked and Shoots Drone From San Francisco Skies.”
When the moment passed I put the shotgun down and reached for my phone instead, just as the wicked contrivance bugged out for the Wild Blue Yonder. The attached photo is all I have in the way of proof, and I hope to God that’s all the proof you’ll ever see. Because honestly, I have no idea who is in possession of the footage I’ve just described. Nor do I have any idea if it will appear in your news feeds later this week. I sincerely hope not, but I know it’s out there, and there isn’t much I can do about it but make sure - if the unthinkable occurs - that you can all say you heard it here first…
Mike 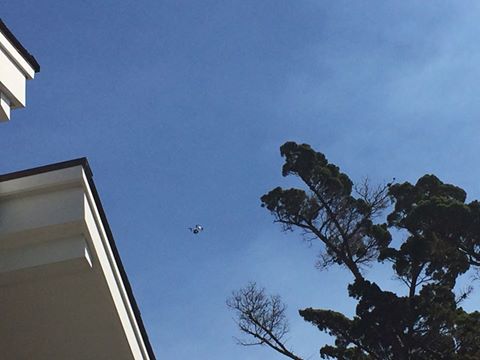