Thanksgoating – Day sixteen. Welcome to me. The Third

When I was young and stupid (now I’m just old and stupid) I decided I wanted to live by the beach so I packed as much stuff that I could into my car and left for Florida with $300 in my pocket. I wanted to work with computers so I figured I could just move 1000 miles away and everything would happen automagically.

It was a little bumpy. I found a room to rent but finding a job was a little more difficult than I had anticipated. Thankfully, I eventually found a job at a little mom & pop computer shop… and that was a huge relief.

But I ran out of money a week or so before my first paycheck. Then I ran out of gas. So, I’d walk about 3 miles to work and back every day. And then I ran out of food. That made things difficult. I literally had nothing. I went my first day with nothing to eat. I was proud so I didn’t say anything to anyone and when I got home from work the next day I was depleted. It was the worst. I hadn’t eaten in probably 48 hours and of all the memories in my life, that is probably the one that sticks with me the most. I’ve been through some stuff, but hunger will humble you like nothing else. Fasting is one thing. Not having the choice is completely different.

I searched my car for change. In the seat cracks, under the seats… anywhere and everywhere. I came up with a handful of coins. Mostly pennies and nickels. I guarantee you I can still remember the exact weight of those coins in my hand.

I walked three blocks to the gas station up the road and was able to buy a packet of ramen noodles for 55 cents. I was embarrassed, but I counted out my nickels and pennies to pay for it. And that was my first meal in two days.

That stuff sticks with you forever.

Today I am thankful for food banks.

I love to cook and prior to the pandemic we always threw a fancy Christmas party. 10 courses of hand passed hors d’oeuvres for 40+ people. Logistical nightmare because everything was from scratch. From lamb lollipops to slow cooked Korean BBQ pork belly. The only price of admission was you had to bring something we could donate to our local food bank (Mana Food Center). We would end up with vehicle loads of goods to drop off. It was pretty awesome and made the weeks of planning so worth it.

When my daughter was in fifth grade, her school did a food drive. These are always important to me. Since I might be known for sometimes, just maybe, going a little bit overboard, I went to Wegmans and bought 200 boxes of Mac & Cheese to donate. I got some looks from the cashier when I checked out.

The following year her middle school had another food drive. I couldn’t just do 200 again so I found out that a Wegmans shopping cart can hold 300 boxes of Mac & Cheese if you improvise. It’s absurd as it sounds and it’s amazing how many people come up to you and ask you questions about where things are when you are clearing the shelves of all the Mac & Cheese

Sorry, I don’t work here, but I do know where that is 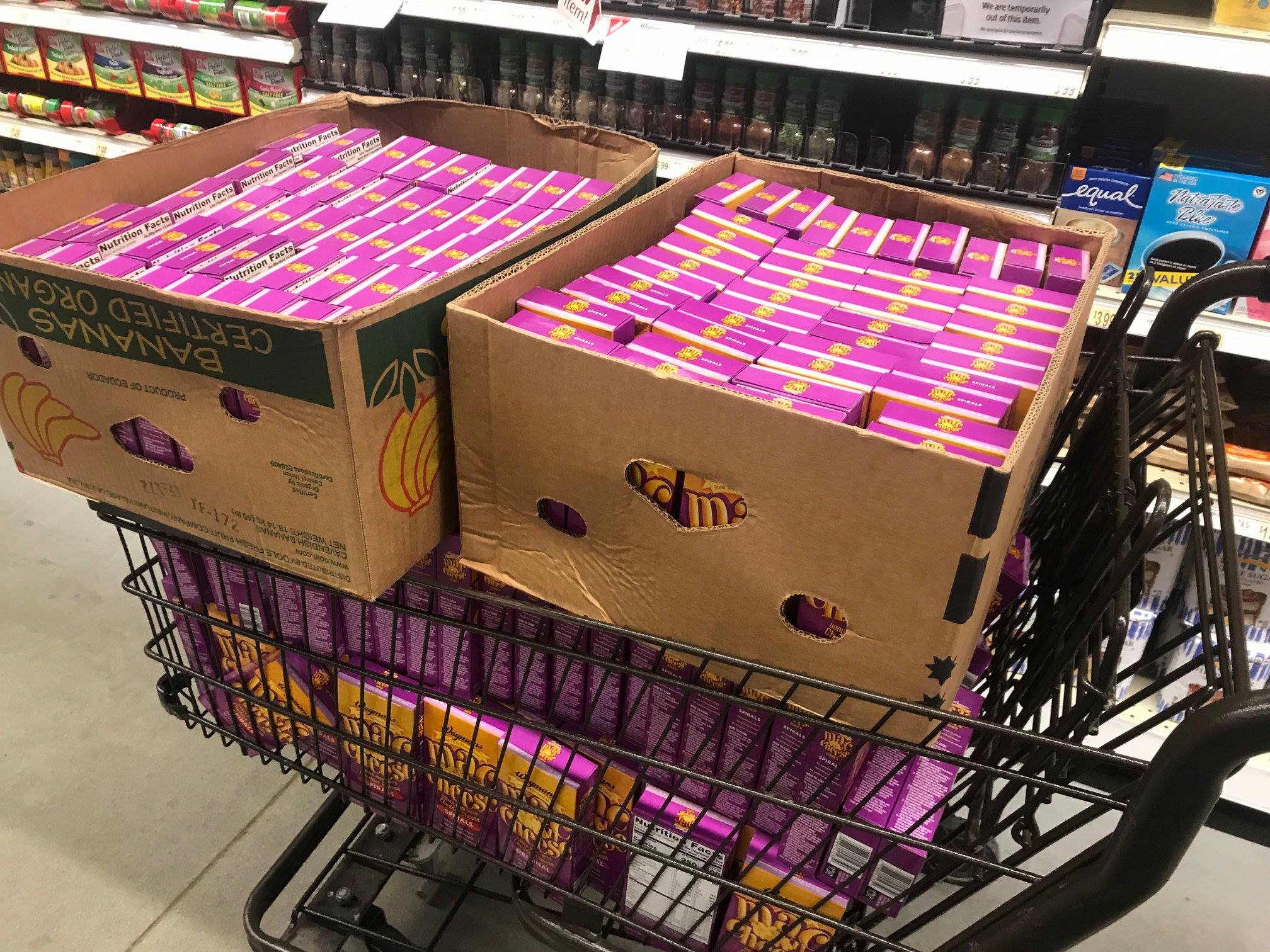 I’m not wealthy, but I’m blessed to be in a position where my family is not for want, and I do my best to help anyone when I am able to, because I’ve been there. This isn’t a PSA to raise awareness about food insecurity. But if you have the ability to, and the opportunity to, dropping off a few cans at a local food bank would probably mean a lot to the people who are embarrassed to be there.

I’ve walked in those shoes.